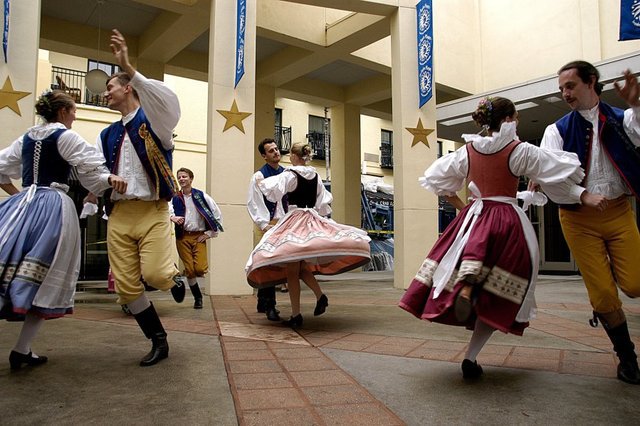 Call it shuttle diplomacy. Or better, greetings from one of the world’s newest democracies to one of the longest running.

Twenty young dancers from the city of Prague in the Czech Republic are spending the 25th anniversary week of that country’s independence in Naples. They’ll perform folk dances and music from two of its major regions — Moravia and Bohemia — Friday at Sugden Theatre in its honor.

Ironically, these students don’t remember Nov. 16, 1989, when students began the demonstration for freedom in Bratislava that echoed the next day — and grew exponentially — in Prague. These dancers were all born after the student-fueled “Velvet Revolution” transformed a cobbled-together Communist state to two democratic republics.

“We call them the Velvet Generation,” said Renata Sabongui, the part-time Naples resident who arranged their two performances here.

“But the students started it all. That’s why students are so important to us,” she emphasized. That’s why the delegation was here — while of professional status — is entirely student age, apart from its director.

Sabongui is a Czech native who is something of a dance diplomat herself. She holds the distinction of being the first dance performer at the then-new Cambier Park bandshell, with the Naples Concert Band, in 1998. Two year later she brought dancers from Prague, she recalled, and won the honor of best park program in the entire state for Naples in 2000.

“Since then there’s been nothing, and I said, ‘I have to do something (for this anniversary),” she declared. And she wanted to do it in her winter home: “I love Naples,” she said, beaming.

It wasn’t as easy as she’d hoped. Every venue, including Cambier Park was booked, but the Sabongui was able to find one date in the Tobye Studio theater at Sugden. It’s smaller and cost the group more, but it promises an intimate experience for the audience.

The city of Prague gave a grant for the dancers’ travel; the dancers or their families raised money for their food and lodging. That’s why the younger dancers are spread all over the Sabongui household this week; the young adult dancers are at the Red Roof Inn.

That’s also why, explained Claire Klingenberg, Sabongui’s daughter, they’ll have to use largely recorded music. In Prague, the troupe, known as the JARO Dancers, has its own band — “but the city couldn’t give enough to bring them over,” she lamented.

Their band did record the music for the two Friday concerts, however. Dancers have brought a set of Slovakian bagpipes — known as bock or dudy, depending on the region — and a pole-held percussion instrument that’s played by striking the ground, called an ozembuch. For the traditional male ax dance, the group even brought their axes.

“You can imagine that was a little difficult to make happen,” Klingenberg said.

The dancers who range from 11 to 22, will also perform a wedding dance, a comic dance game and a number of regional folk dances, all in costume. Klingenberg, program assistant producer, will explain the customs and meaning behind each of them. The region is rich with folk traditions, color and high-energy movement, she says: “It’s like a mosaic.”

The group has spent part of the week giving the city a preview, with a performance at St. Ann Catholic School and a mini performance — barely 12 hours after their flight in — at the Third Street farmers market last Saturday.

With them is director ?ivana Vajsarová, who is famous in folk dance as heir to and teacher of her father’s seminal compilation of 32 dances from the republics’ different regions. František Bonuš’s book on them, “The Golden Gate is Open,” was published by Edward J. P. O’Connor, a University of Connecticut professor who is flying in for the two performances Friday.

Before then, all of the troupe are taking in as much of Southwest Florida as possible. Vajsarová, a nature lover, hopes to see Naples Botanical Garden. Dancer David Dvornik, 14, has both sightseeing and learning on his mind: “I like English. I’d very much like to speak it and want to have a better understanding of American culture.”

Jiri Nekovar, at 11 the youngest dancer, is after the familiar attractions: “I like the airboats and the Everglades,” he declared.

They both have hopes of getting to a skate park here and seeing a live version of that iconic Florida symbol, the alligator. Even on a cool, cool — by local standards — Tuesday, they had jumped into the Gulf of Mexico.

“It’s not cold,” they chorused.